Edit
“On this fine night he searches for his true love. But does desire burn too brightly in his heart?” — The Cave

The Hillbilly is a playable character in The Cave.

The Hillbilly's special ability is to create an air bubble around his head, allowing him to hold his breath underwater for an unlimited amount of time. This ability allows him to traverse long underwater passages that other characters can't survive, although these specific areas are few and far between.

The Hillbilly grew up in the backwoods with a somewhat sizable family, feeling alone in a crowd of siblings, keeping an old Pink Teddy Bear as his best friend. Growing up, he eventually got a job in the Carnival, where he encountered the fabulous 'Two-Legged' Lady, a particularly attractive sideshow attraction. Falling head over heels for her, he constantly vied for her attention, offering a large number of gifts, but constantly being turned down. Eventually spying a large pink teddy bear in a midway game (Very similar to the one he had as a child), he won it as a prize to give to her in order to win her heart. Unfortunately, before he could, he found her in the arms of The Man of Ordinary Strength, another somewhat unimpressive sideshow attraction. Depending on how the player completes his journey through The Cave, The Hillbilly's response to the situation will differ.

Corruption: His heartbreak building to an uncontrollable rage, he burns the whole carnival down with everyone in it. However, due to his relentless passion, he's unable to stop, and travels to other carnivals throughout the country, burning them to the ground, leaving a trail of destruction in his wake.

Redemption: Giving up on ever gaining her affection, he leaves the scene sadly, only to be found by a hillbilly girl hoping for his affections. Settling down with her, they happily raise a large family of little hillbilly children.

Years Later... A Job At The Carnival

The Perfect Gift To Win Her Love

Love Will Find You (Good Ending) 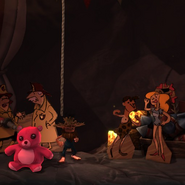 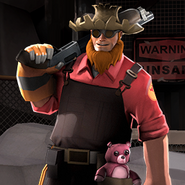 You know what else is flammable? Spies.
Community content is available under CC-BY-SA unless otherwise noted.
Advertisement